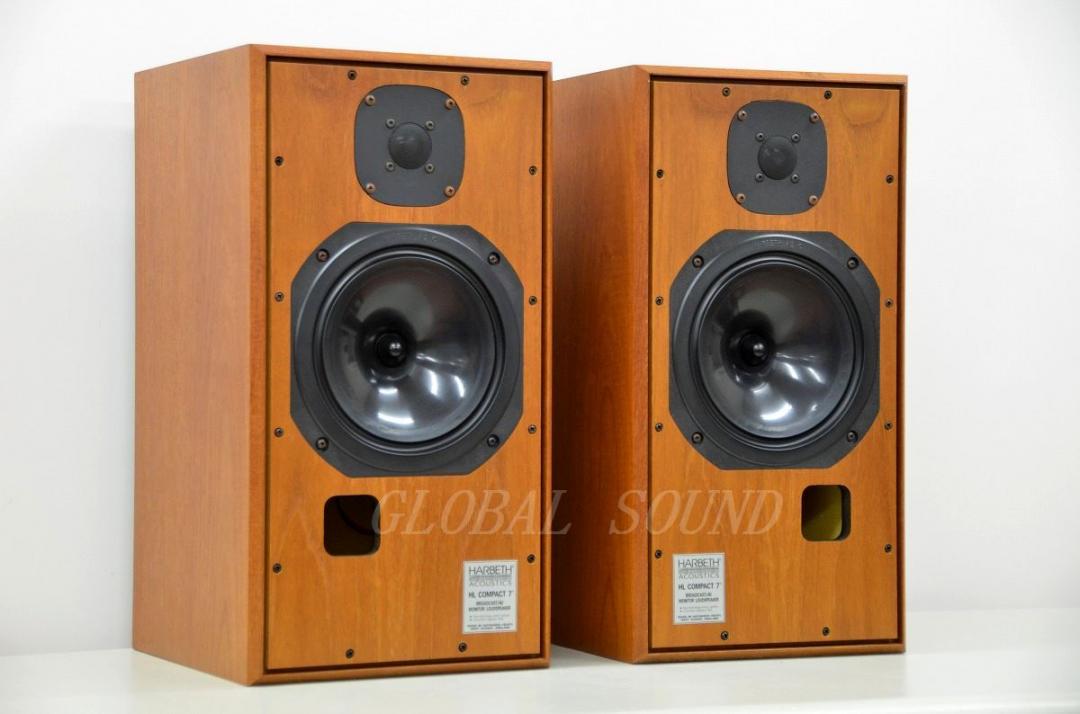 The Harbeth Compact 7 is a two-way box speaker. At first sight, it seems to be just another typical British box monitor, one of the numerous progeny of the BBC research program on accurate box monitors that ran from the 60s until a couple of years ago.1 Indeed Harbeth was, along with Spendor, a company that originated as a commercial application of ideas from the BBC program. It was founded back in the late 60s by one of the program's main figures, Dudley Harwood.2 The Compact 7 reflects its BBC heritage in many respects, but it takes a step towards complete neutrality even beyond its distinguished ancestors' accomplishments.

By the mid-70s, the products arising from BBC research had already set enviable, indeed unprecedented, standards of neutrality in terms of smooth response and accurate tonal character. While most American audiophiles were oohing and aahing over the Dahlquist DQ-lO, which was incapable of accurate timbre, the British were listening to Spendors, Harbeths, and, of course, the LS3/5a, which actually sounded like musical instruments. (TAS did give the word on this in its early days, but public response was not exactly overwhelming.)

This accuracy had been attained by careful analysis of the audible effects of frequency response, directivity, and cabinet radiation. The results were stunning then, and these speakers remain impressive today. But there was one issue remaining, the attempted solution to which was not utterly successful. This concerned coloration from the materials of the drivers themselves.

The human ear is remarkably sensitive to low-level colorations arising from the material that is vibrating to produce the sound. Metal drivers sound metallic, sometimes annoyingly so (metal dome tweeters, in many cases). Kevlar drivers usually exhibit an edge to their sound, derived, one supposes, from their form of break-up when they do break up. Paper sounds like paper, though doped paper is actually a remarkably good material for low signature, if not driven too hard. And plastic drivers tend to have some residual plasticity.

The BBC-heritage plastic drivers of Bextrene and later polypropylene had a low level of material character, but some character there was. The BBC-heritage speakers got most of the way to tonal perfection and made most other speakers sound colored indeed by comparison. But, in absolute terms, a small but identifiable material-based coloration usually remained.

The goal of the Compact 7 project was to design a new driver that would exhibit unprecedentedly low levels of material coloration. The Harbeth people are not telling exactly how it was done. Alan Shaw, head of Harbeth after Harwood's retirement, quite naturally wants to keep the details proprietary. But, in listening terms, it seems to me a distinct step forward has been made.

This is not to say that the Compact 7 is more nearly flat in broadband terms than other box monitors. In practice, the Compact 7 has been voiced a bit to prevailing audiophile taste, with slightly reduced response in the 2-6 kHz region and a return to overall level in the top octave. This is not entirely to my personal taste. I prefer flat on across the "presence" range. But such smooth voicing is rather beside the point of low coloration.

The other aspect of the Compact 7's voicing is along traditional British lines. It is a bit warm in the mid-bass by prevailing audiophile standards.3 But, in practice, speakers with this kind of warmth are in fact more accurate than leaner ones. Audiophiles have accustomed themselves to the leaned-out sound of speakers that do nothing to defend themselves against the inevitable floor cancellation. Without some deliberate attention to the floor effect, all speakers will exhibit a suck-out, often in the order of 5 dB, in the 100-300 Hz region. This is often described as "precision" or "transparency" or the like. But, of course, it is utterly wrong, and makes music that is accurately recorded sound innervated, lifeless, and lightweight.4

The Compact 7 with proper placement--rather low stands, in most rooms--will produce a smooth, flat response through mid-bass and lower mid-range. This is correct sound, even if some audiophiles will think of it as warm. Moreover, its midrange is extremely smooth and uncolored. This speaker really makes instruments sound right. Except for the voicing already noted about the presence range, it is hard to find anything to criticize about the balance and smoothness of the Compact 7.

A perhaps unexpected feature of the new driver is that the Compact 7 is unusually "out of the box" in its imaging behavior. Tendencies for the image to coalesce unduly around the boxes are virtually nonexistent. Actually, this is not so unexpected if you think about it. In good part, it is resonances that make a speaker "speaker-like" and tell the ear that a speaker is there. In effect, resonances generate spurious signals that are localized at the speakers and give hints that the speakers are there as separate sources.5 Resonances are the source of coloration, too. So there is clearly a connection between low coloration and good imaging.

The Compact 7 also has an admirable clarity and purity to its sound. I suppose in our heart of hearts we all still have to admit to ourselves that box speakers aren't quite up to the purity standards of electrostatics, but they can get pretty close, and this one does.

Of course, the Compact 7 has some limitations. It is a relatively small speaker, and thus naturally enough will not pump out deep, deep bass in large rooms. It won't play absurdly loudly and is probably not an ideal choice for attempted close-up symphonic levels in larger rooms. (My understanding is that Harbeth is working on a larger speaker with similar driver technology-something worth anticipating.)

But, as everyone must have noticed, small, simple, but excellent speakers have their virtues. If sheer flat-out sonic scale is not your highest priority, you can get startling good results from an excellent two-way. And indeed, every time I contemplate a speaker with more than three drivers (that isn't a line-source array), skepticism is my first reaction. The problems of driver integration are nearly hopeless with so many. People keep trying, and, of course, the nice thing for manufacturers is that people perceive it as all right for large complex speakers to cost a lot. But the ear is hard to fool and multi-driver speakers are seldom really coherent."

The Harbeth Compact 7, on the other hand, is coherent indeed, along with its other virtues. It is small and unpretentious-looking, but this speaker is quite extraordinarily good at sounding like music. It may take a bit of doing to turn up a dealer, but it is well worth the effort. In my opinion, this will be a classic design. As with its BBC ancestors, musical people will be happily listening to the Compact 7 when most of its more pretentious, self-consciously "audiophile" contemporaries have fallen by the wayside. Highly recommended.

1 It was disbanded to save money. Since even from the most narrowly monetary viewpoint (balance of trade, etc.), it was a huge success, one wonders what the government was thinking.

3 An impassioned audiophile friend went to Powell Hall in St. Louis, at my suggestion, while he was there on a business trip. Powell is acoustic heaven, of course, and the great acoustic designer Cyrill Harris regards it as his masterpiece. My friend's reaction: "There's so much mid-bass. It is muddy!" The absolute sound speaks... but do we listen?

4 A low point in this sad story was the stand that lifted the Quad 63 a couple of feet off the floor, resulting in a depression like the Grand Canyon in the 100-300 Hz range. This absurdity was praised by the audio press as making the speaker extremely transparent, when in fact what it did was to make it sound like a bad car radio.

5 Of course, that is not the whole story. There are radiation pattern things involved, too. See, for example, my Soundwave review in Issue 97.