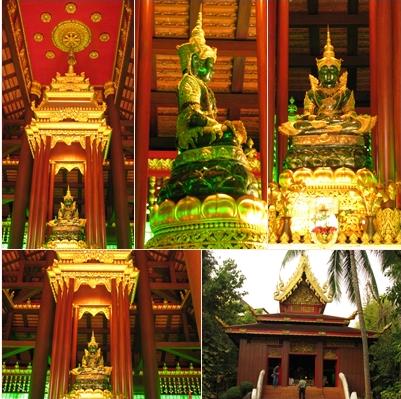 10.00 AM. Agilent tour staff wait everybody at appointment …

10.30 AM. and then Vans bring everybody go to wat phra kaeo.

-First go to see the Wat Phrasrirattana Sasadaram (Wat Phra Kaeo), or Wat Phra Sri Ratanasasadaram, วัดพระศรีรัตนศาสดาราม) is a royal chapel situated within the walls of the Palace, incorrectly referred to as a Buddhist temple it is in fact a chapel, it has all the features of a temple except for living quarters for monks. Built in 1782 the Temple was constructed in accordance with ancient tradition, dating back to Wat Mahathat a royal chapel within the grounds of the royal palace at Sukhothai, and Wat Phra Sri Sanpetch at Ayutthaya. The famed Emerald Buddha is kept within the grounds of the Temple.

- And then go to see the Grand Palace (Phra Borom Maha Ratcha Wang) is a complex of buildings in Bangkok, Thailand. It served as the official residence of the Kings of Thailand from the 18th century onwards. Construction of the Palace began in 1782, during the reign of King Rama I, when he moved the capital across the river from Thonburi to Bangkok. The Palace has been constantly expanded and many additional structures were added over time. The present King of Thailand, King Bhumibol Adulyadej,

- And then go to see the Chakri Mahaprasad Hall, is perhaps the most recognizable building in the entire Grand Palace, as well as being one of the most photographed. Situated to the northern most part of the Chakri buildings group, the Palace formed the front or the façade of the entire halls structures. The Throne Hall sits between the Sanam Ratchakit or Rathakit Field and Phrom Sopha Gates. The Hall is constructed in an eclectic style in a blend of Thai and European (more specifically Renaissance or Italianate) styles. With the lower structure being European while the roofs are graced with Thai-styled green and orange tiled roofs and golden spires or prasads.

- And then go to see the Dusit Mahaprasad Hall, The throne hall is built in the shape of a cross. Its four wings are covered with four-tiered roofs from the center of which rises a beautiful nine-tiered prasat spire, the base of which is supported by four Garudas clasping Nagas. Its north wing leads to a window-throne for formal outdoor receptions which is now seldom used, the last occasion being when King Rama VI received

- And then go to see the Museum Dusit Mahaprasad Hall

Cost per person is: 840 baht (For Group tour)
(This price guarantee up 20 persons)